budgetary nihilism: a response to the deferral of foreign aid

Yesterday I was privileged enough to have an article of mine appear on the ABC Religion and Ethics website.

[In this decision to defer our foreign aid commitments] there is, it seems to me, no clearer indication of the nihilism that now permeates politics, for what other than political nihilism could account for the moral obstinacy of diverting foreign aid to help cover a perceived budgetary shortfall? The obscenity of this decision is only compounded when one realises that this shortfall is itself a product of the irrational rhetoric and shameless opportunism of political parties scrambling to annihilate one another and appease a shrill and self-interested minority.

On top of all this, there is the inescapable irony that Prime Minister Julia Gillard recently assumed the role of co-chair of the UN Millennium Development Goal Advocacy Group, charged with “building political will, rallying additional support, and spurring collective action to achieve the [Millenium Development Goals] by 2015.” It is unclear how a leader of our country can do this with any integrity or credibility, given the immorality of one of the world’s most prosperous countries diverting promised money away from programs for the world’s most vulnerable people.

The piece goes on to discuss an approach to the underlying ethics of foreign aid, particularly from a Christian perspective.

The article was also discussed on ABC’s Radio National Drive program (in which I am referred to as a “fiery … obscure PhD student”, which made me laugh).

The article on ABC R&E is largely an updated version of my essay from this time last year (also in response to aid deferrals in the budget) entitled Foreign aid and moral vision.

deferring aid in 2012-13: embodying the alternative 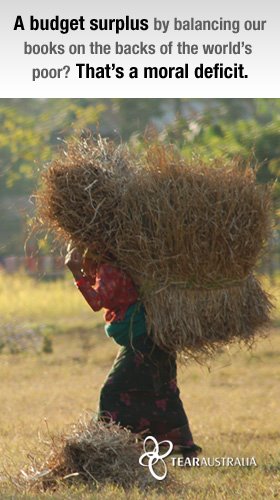 Disclaimer: The views expressed on this blog are my own and do not reflect the opinions or policies of any group or organisation, including my employers, unless otherwise stated.

The 2012-13 Australian Federal budget, just announced, has incited an outcry from those in and around the aid and development sector who had hoped that the Labor Government would keep its promise to raise the overseas aid budget to 0.5% of GNI by 2015.

In the last fortnight the #DontCutAid hashtag has managed to trend consistently on Twitter as those passionate about alleviating poverty spoke out about Australia’s need to do its fair share. It seems that even in the face of a constant barrage of public messaging (and even public-funded major newspaper spreads) the Government decided to significantly reduce the proposed growth in the aid budget (by $2.9 billion) in order to bring the Federal budget back to surplus.

This insistence on bringing the budget back to surplus has been a recent hallmark not only of Australian economic matters but politics in general. Both sides of politics have communicated the need for a surplus as quickly as possible, and both have expressed a willingness to cut what is necessary to get there despite the widespread criticism of mainstream economists.

Some have called the trading of Australia’s aid commitment for a surplus “immoral” and have already shown signs of continuing to fight for increased aid in line with Australia’s commitment to the MDGs. END_OF_DOCUMENT_TOKEN_TO_BE_REPLACED