Even if the deniers were right – which is impossible to credit on rational grounds – the core argument of [A Moral Climate] is that the fossil-fuelled global economy is dangerous to planet earth and to human life, not just because it is warming the climate of the earth but because it is deeply destructive of the diversity and welfare of the ecosystems and human communities from which surplus value is extracted and traded across highways, oceans and jetstreams. The rituals encouraged by the recognition of global warming – turning off lights, turning down the heater, cycling or walking instead of driving, holidaying nearer to home, buying local food, shopping less and conversing more, addressing the causes of fuel poverty locally and internationally –  are good because they are intrinsically right, not just because they have the consequence of reducing carbon emissions. Such actions correct modern thoughtlessness. They sustain the moral claim that it is wrong to live in a civilisation that depends upon the systematic enslavement of peoples and ecosystems to the high resource requirements of a corporately-governed consumer economy. …

… Actions which will have the effect of mitigating climate change are also actions which reaffirm the embodied relationship between inner desire and the outer world of what Christians call Creation. For this reason such actions are intrinsically good, and will promote flourishing even if, as a minority of dissenters suggest, greenhouse gases are not the primary driver of global warming.

Regular readers of life.remixed may recall me mentioning Michael Northcott’s book A Moral Climate in previous posts. On the issue of the ethics of climate change I am yet to come across a more cogent piece of writing, and I heartily recommend it to anyone and everyone.

In the book Northcott argues that a major driver behind global warming is the global market economic system that stretches to all corners of our world. Neoliberal economics, Northcott argues, with its promotion of a deregulated and corporately-controlled global economy, has exacerbated the growth of trade and consumption of goods to the point where few people in rich countries have really taken notice that the supply chains linking the acts of consumption and production have become completely obscured.

Northcott says that in the last forty years of industrial consumerism a vast minority of humans have reached a level of luxury unimagined by any human being of the past, fostering a culture of hedonism and waste. Such people often view it as their birthright to buy new clothes, own cars, enjoy foreign holidays, purchase electronic goods and have access to cheap electricity while living in air-conditioned homes. Such demands foster growing instability in the earth’s ecological system since the myth of infinite wealth creation conflicts with the reality of finite natural resources.

This situation is in some ways analogous to that of Jeremiah in the Old Testament. Northcott recalls how Jeremiah, speaking before and during the judgement that befell Israel in the form of Babylonian captivity, told the rich that they had the blood of the poor on their clothes. They were responsible for the tragedy that was to come upon Israel, a tragedy that would not discriminate between rich and poor. For Jeremiah economic relations that neglect justice and the health of the land ultimately bring ruin to all (e.g. 5:18-29; 7:5-7; 9:7-16; 12:1-4 etc.) This scenario sounds awfully similar to our current predicament. 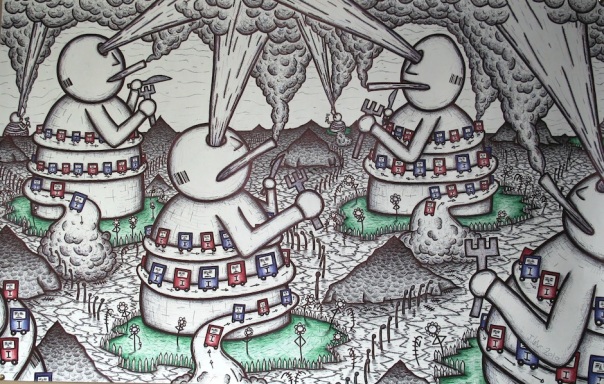 Those familiar with Hebrew prophetic discourse may recall that two of the most common accusations against Israel (probably the most common) are idolatry and injustice. Climate change, if real, is necessarily an injustice, inasmuch as those who contribute least to the problem (the poor) will suffer first and most.

But there is a connection between idolatry and injustice. When Israel’s leaders made money or power or other gods the object of their worship they necessarily became like their idols and unlike the God of Israel. It is at such points that injustice inevitably creeps into one’s actions as they conform to the image of the idol. Worshippers of money become thieves and liars. Worshippers of power become violent and selfish. Worshippers of gods come to embody such characteristics.

There is a deep connection between idolatry and injustice.

And is it any wonder that the economic injustices occurring in our world, not least those related to market-driven climate changing behaviours, exist side-by-side with a world steeped in idolatry directed at the fraudulent incandescence and hope of the globalised free market? The temple is the mall, the palace the financial institutions, and the propaganda the advertising.

It is all around us for those who have eyes to see it – the death, destruction and depression caused by this system. But so many of us, including many Christians, freely give their lives to it. Such idolatry destroys the real hope for creation found in the Creator, and in doing so destroys the imagination needed to envisage an alternative way to live, leaving the oft-stated question that defines unimagination- what else can we do?

It is in this state that Christianity becomes of no threat to unjust empires, and why should it? After all, when Christians place themselves under the idols of the market, they necessarily serve those idols which are in the service of the empire…*

To come back to where we started, climate change is not merely an issue of whether the science is true, or whether a tax, ETS or otherwise is the best course of action. It is an issue that, at a deeper level, must force us to ask ourselves, what does it really mean for us to be human and to live according to the patterns of the Creator?

As Northcott states in the initial quotation above, our actions to mitigate climate change are not merely for mitigation’s sake; they are themselves inherently good actions, for they ween us off our worship of and enslavement to global systems that are responsible for many injustices in our world. These positive actions reconnect us into the harmonious web of creation that the theology of Genesis states we were created for. Even if humans were shown to not be responsible for global warming, such shifts in our behaviour as industrialised humans would benefit us greatly in terms of our connection to the planet, each other, ourselves and God.** In short, such actions help us to recover a fuller sense of humanity.

All of this is to say that when we place economic systems in priority to human goodness and creational health we must ask ourselves, as we should everyday, who do I worship?

—
* Borrowed from Brian J. Walsh and Sylvia C. Keesmaat, Colossians Remixed: Subverting the Empire, 34.
** I have wondered if there is a connection between the rise of atheism and our disconnection from the natural world.